The Young’s started looking for a site for their self-build project back in 2012. After two potential plots fell through, in 2014 they fell in love with a plot of land near Craigellachie in the heart of whisky country.

We wanted to create a place where we could both live and work in what we considered to be one of the most beautiful places in the world. The house is 240m above sea-level in a field looking south over the River Spey valley which is famous for salmon fishing.

It only took 12-14 weeks to get planning permission as the plot had already been approved for building works. Derry and Susan had plans to build a large, luxurious home encompassing five bedrooms over two wings, all with en-suite bathrooms. With some tweaks to the proposed positioning of the property and a revised layout, they were able to go ahead. The ambitious build was completed in spring 2017 and Derry and Susan are due to move in July.

Because of its remote location Longcrook was off the gas grid, so Derry was looking for renewable heating options having rejected oil as too environmentally unfriendly. Right at the start of the project, he got in touch with Plumbing & Renewables Ltd, conveniently based in Moray. They initially looked into a biomass system for him, however to make it cost effective the pellets would have to be delivered in bulk, and this required the building of a 7-tonne pellet store.

Derry approached Kensa Heat Pumps, the UK’s number one ground source heat pump manufacturer and supplier. The local power company was unable to supply a three-phase connection to such a rural plot, but helpfully Kensa has a range of heat pumps with high outputs suitable for larger properties on a single phase connection, such as the 21kW Hybrid which blends refrigerants to deliver efficient space heating and hot water temperatures to 60°C.

As this was Plumbing & Renewables Ltd’s first experience of installing a ground source heat pump, they were able to take advantage of Kensa’s MCS Umbrella Scheme. Effectively a ‘one-stop-shop’ for installers, under the MCS Umbrella Scheme Kensa takes responsibility for the sizing, specification and commissioning of the heat pump system. This allowed Derry to continue to use his preferred installer, Plumbing & Renewables Ltd to gain valuable experience and the project to receive the MCS accreditation it needed to qualify for the Government’s Renewable Heat Incentive (RHI: this scheme has now closed) scheme.

We found Kensa extremely helpful and knowledgeable throughout the whole process.  They offered expert advice on the sizing of the heat pump and technical guidance on the installation and commissioning. Unlike many other manufacturers Kensa offers a range of high output heat pumps on a single phase connection, which was exactly what was needed.

The heat pump unit, cylinders and pipework are neatly housed in the property’s garage which serves as a plantroom. Plumbing & Renewables Ltd also specified three solar thermal panels to boost the hot water capacity of the system. These are mounted to the roof of the house and means that 100% of the property’s heating and hot water needs are now provided by renewable energy.

A ground source heat pump extracts solar energy stored in the surface soil and converts this to a higher temperature for use in a building’s heating distribution system. To extract the heat a series of pipes is buried in the ground in trenches to a depth of 1 – 2m. Typically consisting of coiled pipe, collectors of this nature are referred to as ‘slinkies’. 1m below the surface the ground temperature remains a fairly constant 8-10°C all year round. This makes it an excellent renewable heat source for ground source heat pumps.

The plot at Longcrook had lots of land available which was perfect for slinkies. As Derry approached Plumbing & Renewables Ltd early in the planning phase of his project, this meant that the installation was able to fit in with the build schedule, minimising disruption and reducing digging costs. He also had his own ground-works contractor who was able to undertake the digging of the slinky trenches and Plumbing & Renewables Ltd laid 750m of pipe under the grounds at the south of the house.

My advice to anyone considering using a ground source heat pump is to ensure that your home is well-insulated and built to the best possible specification that you can afford. The aim is to get the heat load down as low as possible so that the heat pump will operate more efficiently. Also make sure your heating distribution system allows the heat pump to work as efficiently as possible.

Derry worked with Excel Scotland, a bespoke luxury house-builder covering North East Scotland, to design and plan the project to a high specification. The house is well-insulated with underfloor heating downstairs and radiators upstairs, also installed by Excel Scotland. The underfloor heating has a large heat emitting area and helps to increase the performance of the ground source heat pump.

I did go over the initial budget with the build as I ended up going for higher specification fittings and fixtures as I saw things I liked the look of. However, I had expected this to be the case and so I kept my budget fairly dynamic, continually amending it along the way.

Thanks to the renewable heating systems installed at Longcrook, Derry benefits from the Government’s Domestic Renewable Heat Incentive (RHI: this scheme has now closed) which provides him with seven year quarterly payments based on the deemed energy consumption of the renewable technologies. Plumbing & Renewables Ltd estimate that the payback from the ground source heat pump will be in excess of £20,000 over the seven year period with an additional £3,000 from the solar thermal, plus the associated fuel cost savings. 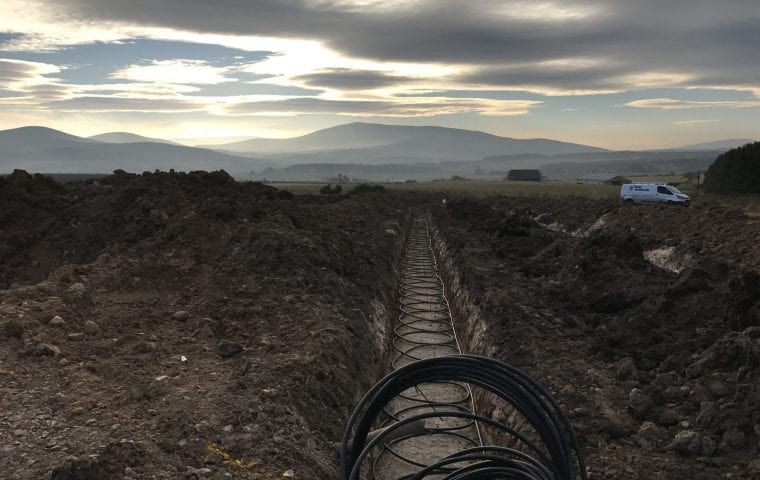